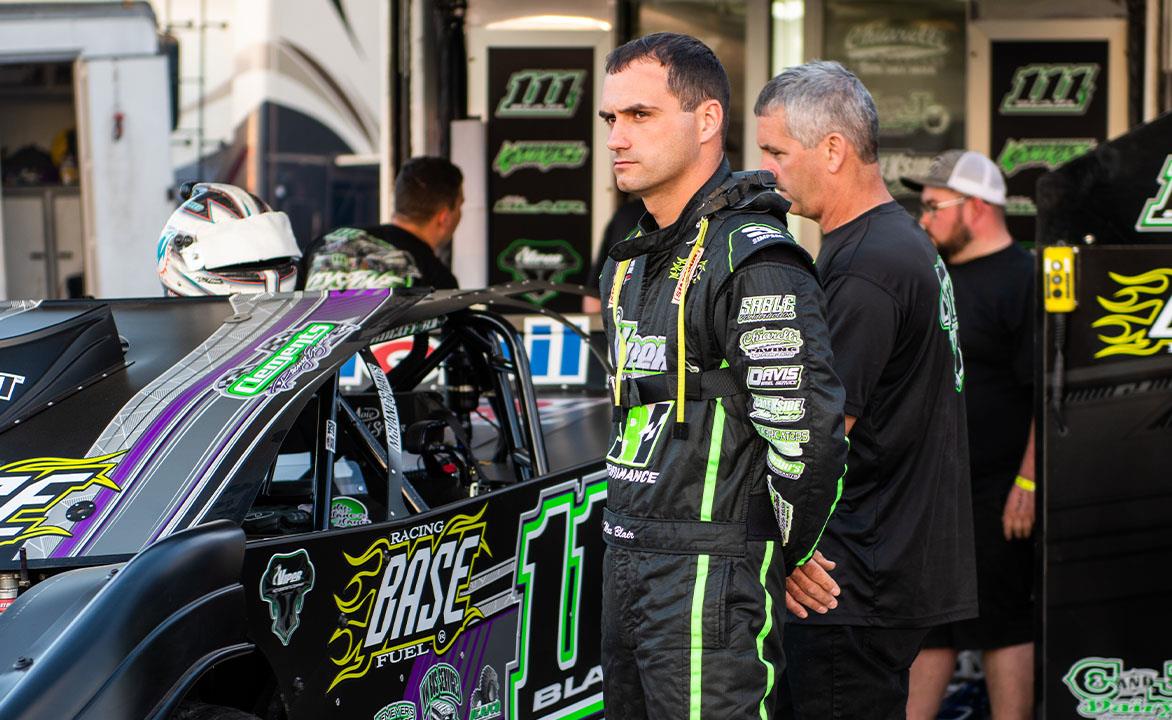 Blair looks ahead to Cherokee after Successful DIRTcar Nationals

By Mike Warren, WOO Late Model Series PR (Gaffney, SC) -- “Success is the sum of small efforts repeated day in and day out,” as written by author Robert Collier.

Max Blair tasted success at DIRTcar Nationals, running against the top field of drivers in the nation. Those small efforts during the week-long grind resulted in his first World of Outlaws CASE Construction Equipment Late Model Series top-five of the season and momentum for the second annual Rock Gault Memorial, March 25-26.

However, while many drivers would be happy with that result, Blair isn’t satisfied. Despite transferring to all but one Feature [Monday’s DIRTcar Late Model event] and winning his first Heat Race of 2022, he felt there were a few occasions he could’ve been better.

“I think looking back on it; I actually left some positions and points on the table,” Blair said. “A couple of nights, I was running four or five spots higher with about 10-12 to go, and a yellow would come out right at the end of the race, and I wound up having a bad start and got shuffled back.”

Blair didn’t hesitate to point out one area that needed improvement. The quality of drivers at Speedweeks means a fast start is necessary, especially in Qualifying.

“We were pretty competitive down there,” Blair said. “We didn’t get a lot of finishes that showed how competitive we were. Especially qualifying terrible every night and starting on the third row in the Heat Race against that field, your day is done.

“The one night we finally won a Heat Race and started up front in the Feature we ran up front. We were good enough to run better every night in the Feature. You just can’t start that far back.”

Despite hoping for a few more spots, Blair accomplished his goal at Volusia—leading the chase for World of Outlaws CASE Late Models Rookie of the Year. He holds a 10-point lead over Tanner English entering the Rock Gault Memorial at Cherokee.

While he’s confident in his team’s ability to hold his position, the next few tracks on the schedule give him a disadvantage in experience compared to his peers.

“Leaving Florida, leading the Rookie points was our goal,” Blair said. “We came out with the lead but obviously, a lot of the places we’re getting ready to go that Tanner [English] has more experience at than I do.

“Some of the stuff where I have a little bit more experience on him won’t come until a little later in the year.”

Even though Blair hasn’t raced a Super Late Model at Cherokee in almost a decade, he does have experience inside a crate at “The Place Your Momma Warned You About” – a top-three in 2017.

While the amount of racing a Rookie of the Year contender endures seems like a lot, it doesn’t faze the Keystone State driver. He’s run a high volume of events in recent years.The only difference is how long it takes to reach his destination.

“I’m used to racing a lot,” Blair said. “I’ve raced 85-90 times for five-six years in a row. The difference is I was driving three or four hours to get there and not 15. That’s going to be the biggest change for me.”

Before making the stop in Cherokee, Blair is seeking more experience on red clay with a visit to the Talladega Short Track this weekend, followed by the Xtreme DIRTcar Series event at Lake View Motor Speedway on March 24. He’s one of the drivers seeking a weekend bonus put up by the speedway. If a driver wins a race at both Lake View and Cherokee, they’ll earn an extra $2,000. If someone sweeps the weekend, that driver will receive $5,000.

He hopes those small efforts to get better and gain more knowledge lead to more success as the season progresses.

Blair and the World of Outlaws CASE Late Models make their first of three appearances at Cherokee Speedway March 25-26. The event will be co-sanctioned with the Drydene Xtreme DIRTcar Series. For Tickets: CLICK HERE.
https://bit.ly/3JkO723

If you can’t make it to the track, watch all the action live on DIRTVision – either online on with the DIRTVision App.