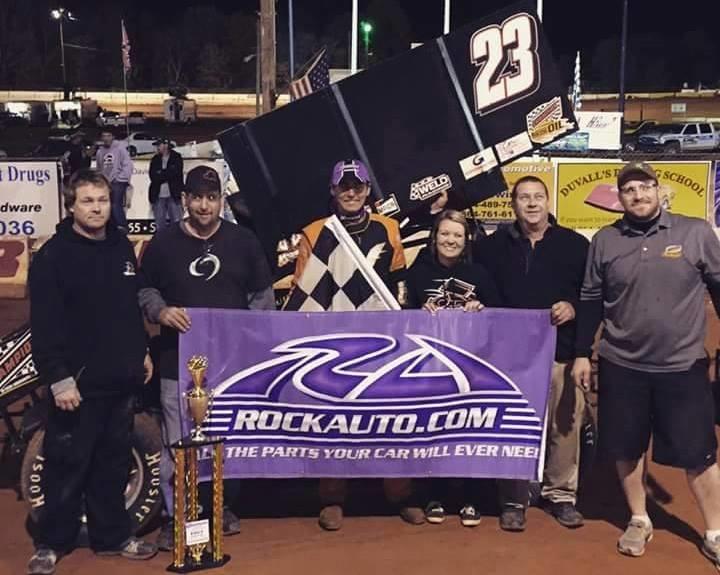 Starks and car owner Jeff McCall put together a pair of podium finishes during the weekend, which wrapped up with a dominating performance at Cherokee Speedway on Saturday.

The event began with Starks charging from eighth to a runner-up result during a heat race.

“We had a really good start and were up to third or fourth by the first corner,” he said. “We were battling for second and fortunately for us the second-place runner had a mechanical failure. That gave us a restart with (Chad) Kemenah ahead of us with seven or eight laps to go. I tried a big slider on him in turns one and two. I pulled even with him on the exit of turn two, but I couldn’t quite get by him. The track was super fast and it was some tight racing. I knew not to push the envelope too much because going eighth to second was enough for the inversion.”

That made Starks the high-points driver and after the zero was rolled for the feature inversion, Starks lined up on the pole for the 30-lap main event.

“I got a good start and just ran my own race,” he said. “I ran the whole race with my tail between my legs. I swear I could hear (Terry McCarl) behind me the whole race. I was trying to do everything I could to get away from him because a guy like McCarl will be there any time you make any mistakes. Come to find out after the main we had a pretty good lead. The car handled great. Everything went great and we had luck on our side.”

It was the eighth victory of the season for Starks and his second in four races with McCall.

“The track was real fast and a little narrow,” he said. “I knew that with a guy like McCarl starting on the pole, you have to take every chance you can take. It may be determined on the start of the race. I tried to jump it a little, but I jumped it pretty bad. They called it back and the second start was pretty even. We pulled alongside of him coming out of turn two. I tried going for a slider, but he pinched me down a bit and took my line like a smart driver should. After that traffic was pretty tricky. We could get to him, just never around him.”

Starks ran second for the entire race before finishing in the runner-up position. He also advanced from fourth to third place each night during the dash, which didn’t have any effect on the race format.

“Both tracks were really cool,” he said. “They were a little bigger than we ran on before. We had McCarl, Kemenah and (Dusty) Zomer show up. They are three of the best in the business. You know you’re in good company racing with them. It was nice to run up front with them let alone get a win. It was a pretty good weekend.”

Starks will wrap up his season with McCall this Thursday through Saturday at The Dirt Track at Charlotte in Concord, N.C., for the Bad Boy Buggies World of Outlaws World Finals with the World of Outlaws Sprint Car Series.

“I thought we were good in Florida a couple of weeks ago, but I didn’t feel like we were great,” he said. “I’m really confident now. Both of these tracks (last weekend) were high speed and that’s what we’ll be on at The Dirt Track at Charlotte. I feel real comfortable.”

Starks has t-shirts and hoodies for sale at http://www.TreyStarksRacing.com.

Established in 2004, SpeedMart has developed into a leading supplier of sprint car and racing products in the Northwest. For more information, visit http://www.SpeedMartInc.com.

“SpeedMart really benefits us because they are right next to our home,” Starks said. “Even though we are traveling a lot, I know SpeedMart will always have anything we need.”