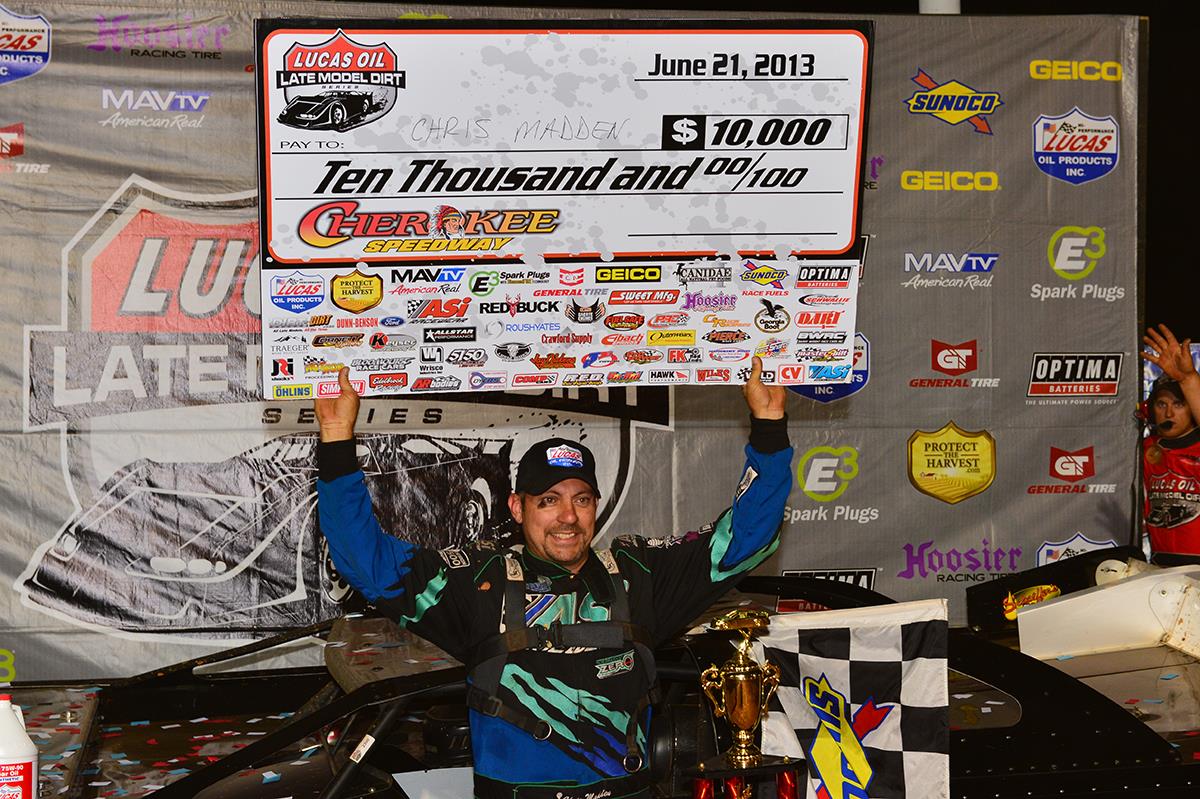 “It feels great to win here at Cherokee, it has been a while. The car was super tonight, we had a few problems there in traffic, but overall, after that last caution, I could drive it anywhere on the track. I have a lot of friends here tonight. My wife and kids left for vacation, I will join them tomorrow,” said the winner afterwards.

Madden battled with Ferguson and Dixon for the first several circuits. Dixon got by Ferguson on lap 16 and then pursued Madden for the lead. Dixon and Ferguson were able to stay close to Madden as the race for the lead began to heat up as the trio got into lapped traffic.

Dixon nearly took the lead from Madden before a caution came out as the two split a lapped car. Madden then slipped in turn two drifting up the track on the restart and again Dixon nearly gained the lead. Dixon held second until three laps remained when he slowed suddenly bringing out the final caution of the race. Madden then cruised on for the victory after Dixon was through for the night.

“I have to thank Clements Racing Engines, Bloomquist Race Cars, Hamrick’s of Gaffney, Henderson Amusement, KC Transport and all of my other great sponsors for making this possible, the track was real good tonight it had two distinct grooves and I hope the fans enjoyed the show.”

Francis and Erb, who battled for fourth and fifth for most of the last half of the race, were the beneficiaries after Dixon left the race, but neither driver had anything for Madden in the final laps. Last year’s Lucas Oil Late Model Dirt Series Rookie of the Year, Jonathan Davenport was running third when he lost his fuel cell on lap 42 bringing out a red flag.

In preliminary action, Steve Shaver set the overall time (Group A) amongst the 27 entrants, with a lap of 15.021 seconds. Casey Roberts set the fastest time in Group B with a time of 15.073 seconds. Chris Madden, Chris Ferguson, and Brent Dixon won their respective heat races. Tim Allen won the B-Main.

The Lucas Oil Late Model Dirt Series will round out the weekend in the Blue Ridge Mountains at Wythe Raceway in Rural Retreat, VA on Saturday, June 22nd. The event will feature RED BUCK Time Trials, Heat Races, B-Mains, and the 50-Lap $10,000-to-win “Blue Ridge 50”. For more information, visit www.wytheraceway.com.

For the latest breaking news on the Lucas Oil Late Model Dirt Series, log onto www.lucasdirt.com and follow the series on www.facebook.com/lucasdirt and www.twitter.com/#!/lucasdirt.