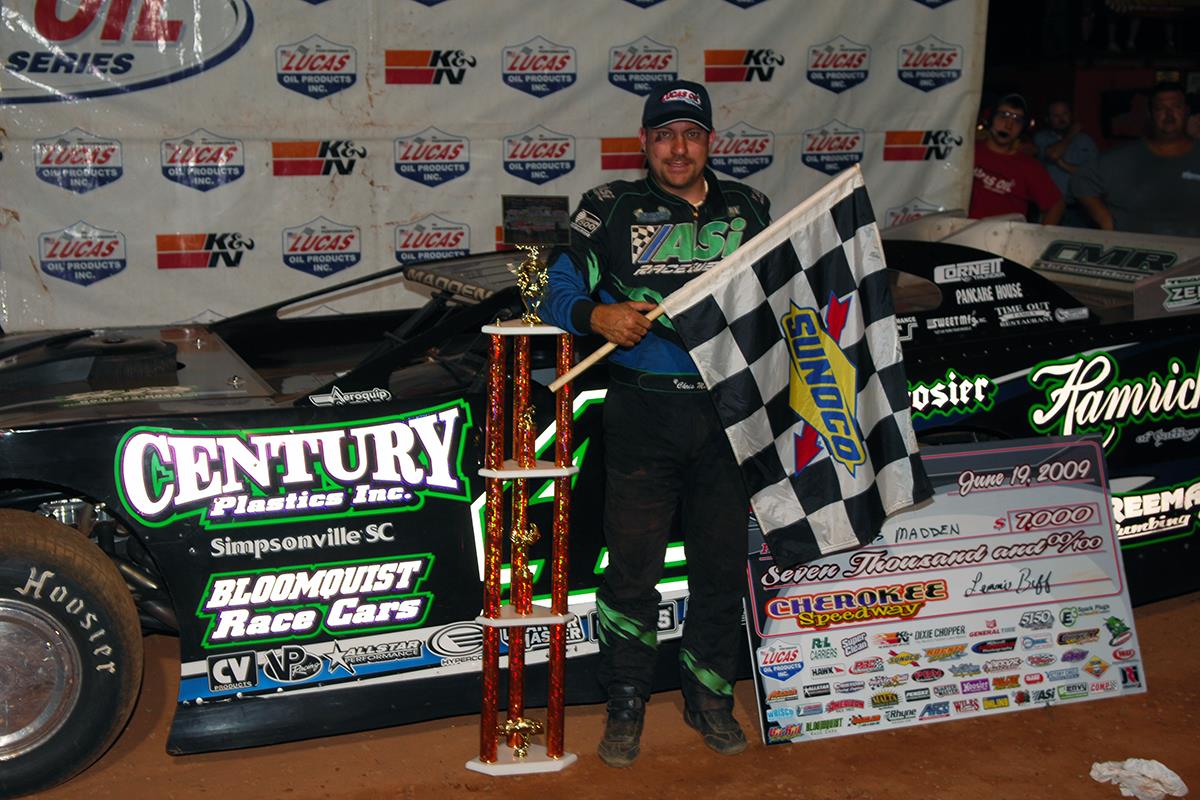 Young Chris Ferguson and Madden sat on the front row for the 35 lap event as Madden took the early lead when Ferguson jumped the cushion in turn three losing several spots on the opening lap. Petey Ivey moved into second with McDowell, Owens, and Cooke behind the leader Madden with a lap scored.

The first caution of the caution came with two laps scored for Ricky Weeks who headed pitside, during the caution Ivey went to the hot pit in the infield after giving up his second spot in the line-up as the crew worked under the hood as Ivey would be finished for the race.

On the Delaware double-file restart, Madden was out in front by himself with McDowell and Owens lined up side-by-side. But a three-car incident when Ferguson’s right front tire went down caused a pile-up with Dennis Franklin and John Blankenship taking the brunt of the accident, bringing out the caution once again. On the restart, Madden would put several car lengths between himself and the new second place car of McDowell.

The top five of Madden, McDowell, Owens, Jonathan Davenport, and Cooke would stay that way in the running order on the track as Madden built a big lead with 21 laps in the books. Madden then had to contend with heavy traffic and that slowed his progress enough so that the cars of McDowell, Owens, and Davenport were able to close the gap on it.

The top three then went nose-to-tail through traffic with Madden having troublesome negotiating traffic and continued to be a problem as McDowell, Owens, and Davenport kept applying the pressure on Madden, but Madden got a break with two laps to go as the fourth-place running Davenport slowed with a right rear flat tire with 33 laps scored.

Madden then had a clear race track in front of him with a green-white-checkered finish set-up as Madden got a great restart as the green flag flew to complete the last two laps as he was not to be denied as he sped on to pick up the victory as he outdistanced McDowell and Owens to the checkered flag.

In Lucas Oil Victory Lane for the first time since last June at Talladega Short Track Madden was happy to win in front of his hometown fans and family. “We went to qualify early and the car was real good, we’ve run well here all year, it’s great to win in front of all these people here, the track was fast and racy tonight, I have to thank my crew, my wife, kids and all my sponsors I couldn’t do it without them and to win a Lucas Oil race is great against this tough competition they have,” said the 34-year-old driver.

McDowell driving NASCAR’s Clint Bowyer’s/Chevrolet/Warrior Race Cars Impala SS moved into second in points after his runner-up finish Friday Night. Owens in the Mike Reece/Reece Monuments/Bloomquist Race Cars Ford Fusion was third as he climbed to third in the points behind Bloomquist and McDowell.

In preliminary action Chris Ferguson was the PRC Fast Timer among the 31 entries with a lap of 15.415 seconds. Heat race winners were Chris Ferguson, Chris Madden and Jimmy Owens. David Breazeale won the B-main. The event was race number five on the 2009 Summer Sizzler Tour as Madden became the fifth different winner in the five race mini-series.