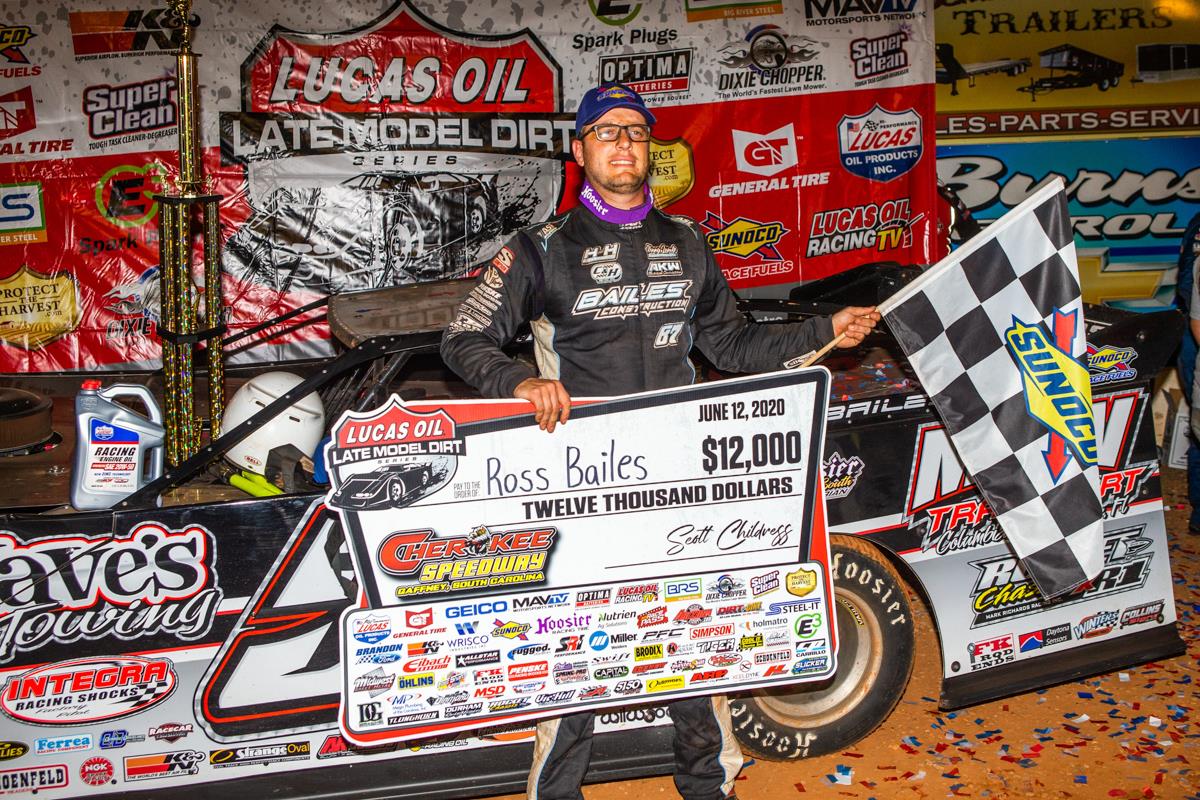 GAFFNEY, SC (June 12, 2020) – Ross Bailes wins the 22nd Annual Grassy Smith Memorial at Cherokee Speedway on Friday night. After battling with Brandon Overton throughout the event, he took the lead on the final lap when Brandon Overton suffered a flat tire heading down the back stretch. Bailes seized control of the lead and flashed across the finish line to pick up his second career Lucas Oil Late Model Dirt Series victory.

A very competitive 50 lap main event saw Bailes become the 10th different winner in 14 Lucas Oil Late Model Dirt Series races this season. The event was the first since February with fans in the grandstands.

The packed house saw a great race for the lead between Bailes and Overton, who entered the event on a 2-race Lucas Oil Late Model Dirt Series win streak. Overton’s misfortune on the final lap dropped him to fourth at the finish. Brandon Sheppard and Jimmy Owens dueled back-and-forth during the last half of the race to come home second and third. Chris Ferguson rounded out the top five.

Bailes grabbed the lead on the opening lap with Overton and Owens trailing. Bailes received heavy pressure from Overton as the two encountered heavy traffic. Overton made his first pass for the lead on lap 23, but Bailes came back on lap 28 to regain the top spot. Overton returned the favor, repassing Bailes on lap 46. However, a caution with 48 laps complete set up a dash to the finish. On the restart Overton was leading Bailes, Sheppard, and Owens.

Overton had control of the race until his car suddenly slowed coming off of turn two on the last lap. Bailes, Sheppard and Owens all went by Overton.

In Lucas Oil Victory Lane Bailes was breathless as he talked to the packed grandstand of onlookers. “Man, this is unbelievable. We have been through a lot this year. I am so excited to win this in front of my home crowd. I mean it can’t get any better than that,” said the 30-year-old racer.

“The car was better than the driver. I just didn’t know what to do in lapped traffic and he [Overton] had the advantage of being behind me and seeing where he needed to go. Overton had a good car too, he probably has the best car in the country right now and we were right there with him. I hate what happened to Brandon, but luckily I was on the good end of that one at the finish. This is the first Lucas Oil win for Auggie (Burttram), and I wanted to get in his car and prove we could do it. He has as good of equipment as you can get. This is the first night out on a new car and we had a rebuilt Clements engine.”

Sheppard came home in second in the Mark Richards Racing Rocket 1 House Car. “The race was pretty crazy out there tonight. We had a pretty good car. I think I ran the top a little bit too early the first few laps. I think I burned my tires up. All-in-all another second-place finish here at Gaffney in front of a packed crowd is pretty good. It’s really nice to see all these fans out here. We have really missed them being at the track.”

Owens rounded out the podium speeches for the night. “We aren’t worried about the points right now. They will take care of themselves. We are out here trying to win as many races as we can. I hope the fans enjoyed it. We were having a ball out there. I jumped to the outside and I was probably harder on tires than anyone else. I was trying to put on a show, and it didn’t work out like I wanted to. Hats off to Ross Bailes, I was glad to see him win.”