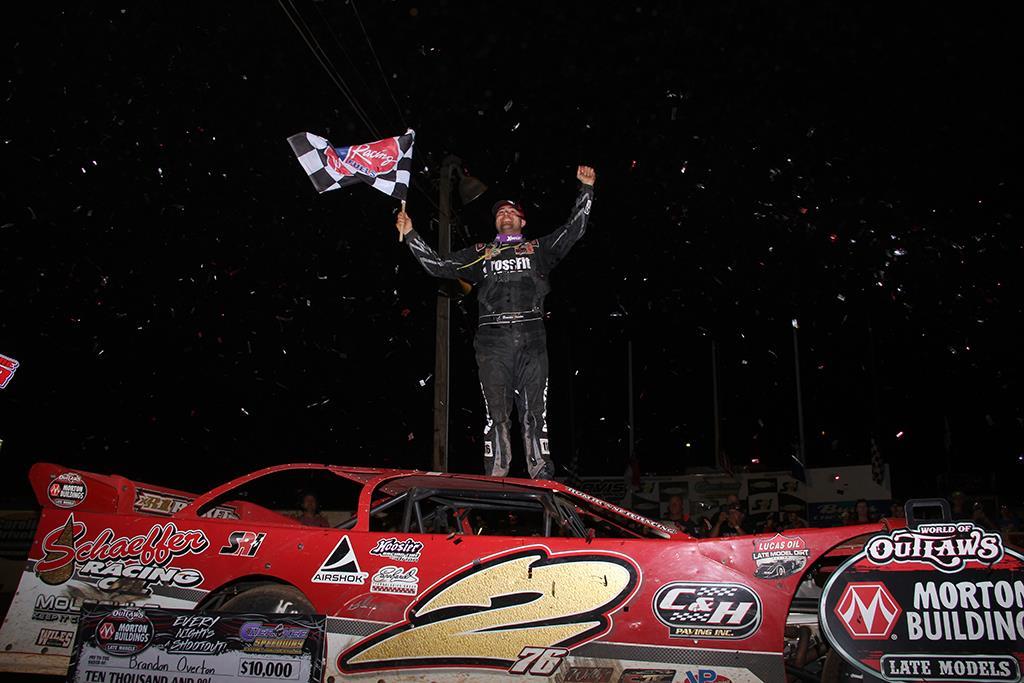 By Jordan DeLucia, WOO Late Model Series PR (Gaffney, SC) -- Like the late Dirt Late Model racing legend Mike Duvall did many times over in his historic career, Brandon Overton drove with the tenacity and endurance of a true Southeastern champion on Friday night and put it in Victory Lane at Cherokee Speedway.

For the third time this season, he and the Rum Runner Racing team have defeated the Outlaws in their home region. Chris Madden and Chase Junghans held strong inside the top three all race long to capture the final two podium spots.

A capacity crowd filled the grandstands to watch “The Most Powerful Late Models on the Planet” take on the always-competitive Southeast locals in the inaugural running of the Mike Duvall Memorial, a Flintstone F1yer-themed tribute to the late Cowpens, SC driver.

Overton’s trip to Victory Lane started with a bit of luck in the redraw after a runner-up finish in his Drydene Heat race, pulling the pole position as the final driver to draw. Right from the drop of the green, Overton took off in his Rocket Chassis and never looked back, leading all 50 laps to win his sixth World of Outlaws Morton Buildings Late Model Series Feature.

“It’s always easier when you can set the pace,” Overton said. “Our car was really, really good. That’s probably as good as I’ve had one, especially around the bottom here.”

“Big Sexy” faced pressure all race long from the previous night’s winner, Chris Madden, who trailed Overton almost the whole race. At one point, Madden made a great bid for the lead to Overton’s inside in lapped traffic, but the yellow flag was thrown on the same lap, spoiling the #0M’s biggest chance to take the top spot.

“I got into lapped traffic one time and was able to capitalize on it, made the pass on Overton and then the caution came out and had to go back. He made a mistake that one time and then didn’t make it again,” Madden said.

Overton also dealt with several cautions throughout the race, forcing him to be very vigilant with his car on the restarts. With a stacked field behind him that included 18-time winner this season, Brandon Sheppard, second-high points man Chase Junghans and three-time Series champion Darrell Lanigan, Overton never let the pressure get to him.

“My car was right and doing its thing, it felt good. So, I wasn’t panicking,” Overton said.

The Evans, GA-native took home a custom-built trophy commemorating the big win and Duvall’s legacy, complete with the “Flintstone F1yer” logo, car, and his famous black hat atop the artistic display. It will definitely sit as one of the most creative trophies on Rum Runner Racing’s shelf, along with the several other Feature winner trophies Overton has driven the team to collect this season.

Still less than one full year into driving for team owner Joey Coulter, Overton has certainly made his mark behind the wheel of the #2. Winning the World of Outlaws season opener at Screven Motor Speedway back in February and the Series visit to Cochran Motor Speedway in May, he’s shown his strength at the places he knows best versus the Outlaws this year. And he still wants more.

“To come back home to familiar territory and defend it a bit, it’s awesome,” Overton said. “These guys are the best. We’re really proud of it. But we’re not done yet, we want to win some more so we’re just going to keep digging.”

Chase Junghans bagged the final podium spot and control of the runner-up position in Series points with two top-five finishes in the past two nights. Aiming for his highest-ever finish in the overall points standings, the Manhattan, KS-driver is looking more confident and consistent as ever out on the track.

“Third-place is a good points night for us. We’ve got three more races to stay up front, so we’ve just got to keep our head down and keep chugging along. Hopefully, we can be there standing second in points to Mark [Richards] and Brandon [Sheppard],” Junghans said.

The Outlaws wrap up this weekend in the Southeast with a visit to 411 Motor Speedway on Saturday night. Hot Laps go live on DIRTVision at 6:30 p.m. ET!