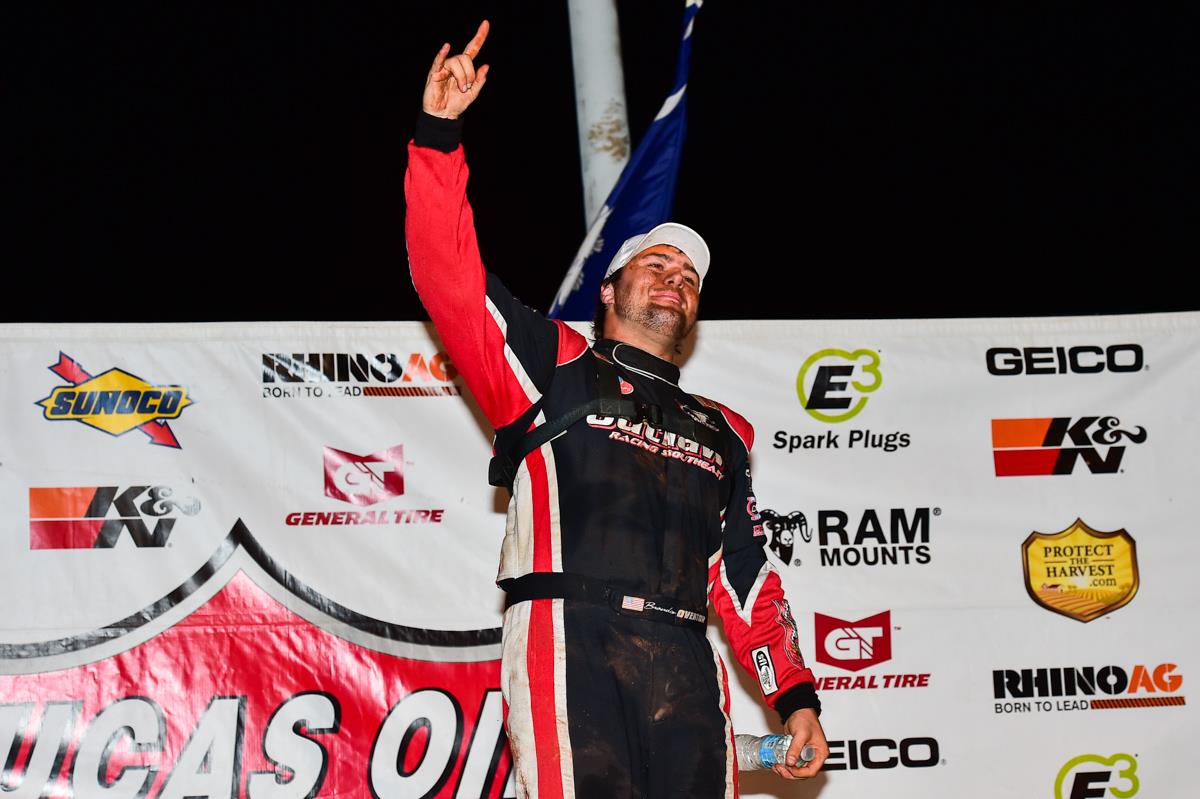 Overton’s Chip Stone and Randy Weaver-owned, Longhorn Chassis rallied in the last 15 laps of the race to get the win. Overton overcame a side-by-side duel with Scott Bloomquist and then he passed four cars in front of him on his way to victory lane.

Josh Richards; in his first-ever appearance at Cherokee Speedway; came home in second in the Best Performance Motorsports, Durham-powered Rocket Chassis. With his runner-up finish, Richards maintains the championship points lead over Scott Bloomquist and Tim McCreadie heading into the series’ next race on Saturday night at Smoky Mountain Speedway in Maryville, Tennessee.

In Lucas Oil Victory Lane, Overton was grateful for the chance to drive for the Stone/Weaver Team. “Chip Stone was coming down tonight, but he had a flat tire and Randy [Weaver] stayed at home tonight. So, it was ironic we got to victory lane and our left rear tire was flat. Man, that was an exciting race. We went with a harder compound on the right rear than most. A lot of them went softer and for those that did it kind of brought them back to me in the last ten laps or so,” said the 26-year-old in Victory Lane.

Davenport led the first 40 laps of the race before being overtaken by Overton. Davenport’s night then ended a few laps later up against the turn one wall. Richards then picked up the challenge for the lead, but fell just short of his sixth series win of the season.

“We had a really good car,” said Richards. “For this being our first-time here that’s pretty good. Just seeing this place on video doesn’t do it justice. It is a lot bigger than you think. You must learn where to let off the accelerator and get back on the gas here. It took us a while, but I think we adapted well. It was a good points night. Congratulations to Brandon on the win.”

Owens was glad to be in the hunt for the win in the final ten laps. “Our car was good all night, we tried our best to hang in there, those two in front of me were just a little bit better than us. The track was in really good shape, we have run here enough, but Overton picked the right tire obviously and that’s why he won the race.”