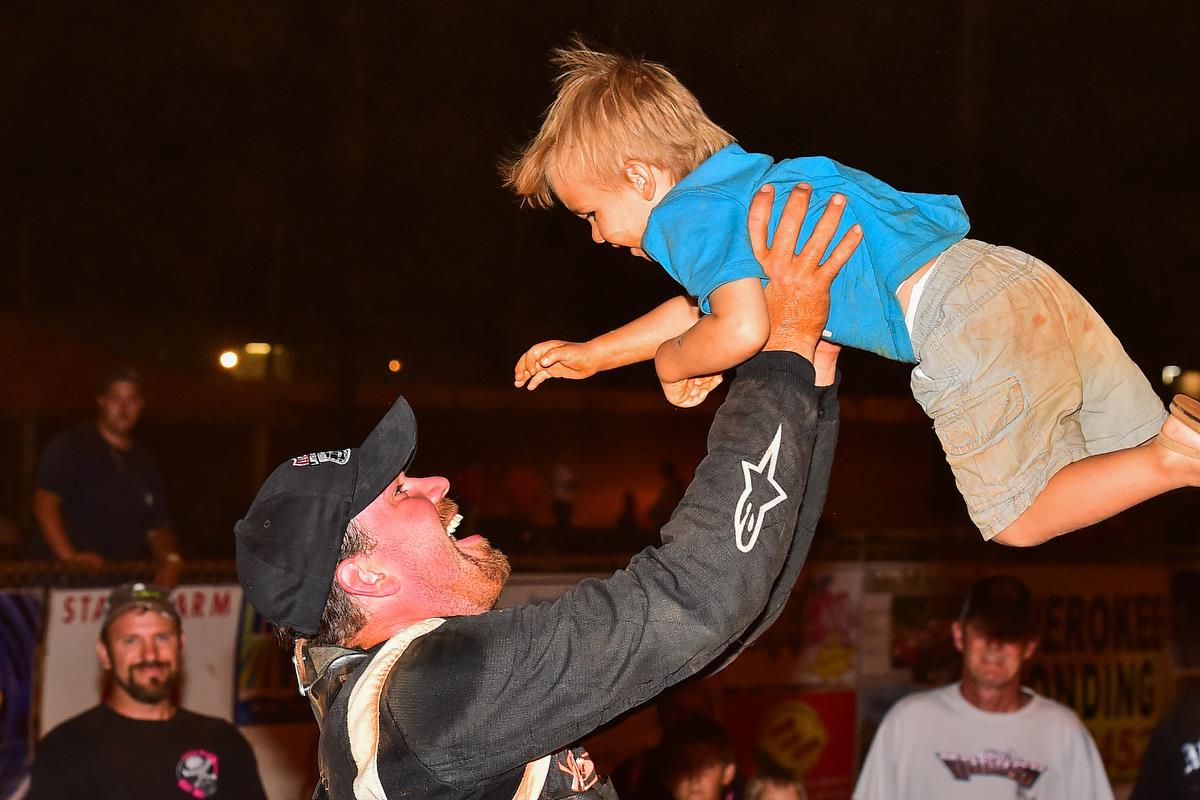 Ferguson led the first 44 laps of the race and finished second. He was trailed by defending race winner, Don O’Neal. Ross Bailes and Earl Pearson Jr. completed the Top-5.

“That win took a lot of patience. I knew when we rolled out for the feature, our tires were too hard. I managed the tires for the first 15 or so laps, because I didn’t want to burn the edges off. This car just came alive late in the race. I’d really like to thank my crew; they worked their tails off on this thing,” said Davenport in Lucas Oil Victory Lane.

“Thank you to all of these fans for coming out here tonight! I almost consider this my home track. I just love coming to this place. I almost got too excited there when I caught up to Chris. I found a little lane coming off of turn four. I knew he was running the top and the only way I was going to pass him was to slide him. I hope I left him enough room. He and I usually race pretty clean together. Man, what a roll we are on!”

“Thanks to Kevin and Lee Roy Rumley, TS Crane, Sundance Services, Sundance Flowback Well Testing, Mega Plumbing of the Carolinas, JRi Shocks, Bryson Motorsports, Dirtwrap, FK Rod Ends, Bobby and Terry Labonte and of course everybody at Longhorn Chassis. I want to race every night, this is fun.”

Ferguson set a new track record in Miller Welders Time Trials, and then won the first heat to earn the pole starting spot for the 50-lap feature. A lap 40 caution slowed the field for one last time. That allowed Davenport to set him up on the final restart once it went green.

“Yes, I should have stayed higher on the track,” said Ferguson. “We had a great car all night long, so what can you say? I wanted to win this race bad; we had a lot of fans here. We came so close to getting our first Lucas Oil victory, so it is a bit heartbreaking. Even still, second place against these guys says something about our race team. We never give up!”

“I left the door open with five to go. I thought I got into the corner well enough, but apparently not. I just couldn’t hold him off. He is the best driver in the country right now. It was a good night for Longhorn Chassis and we will get them next time,” said the driver of the Carver and Sons Roofing, Langley Collision Center #22.

In preliminary action, Chris Ferguson set the overall Miller Welders Fast Time (Group B) amongst the 27 entrants, with a lap of 14.754 seconds. Scott Bloomquist set the fastest time in Group A with a time of 14.878 seconds. Chris Ferguson, Jared Landers, and Steve Casebolt won their respective heat races. Eddie Carrier Jr. won the B-Main.