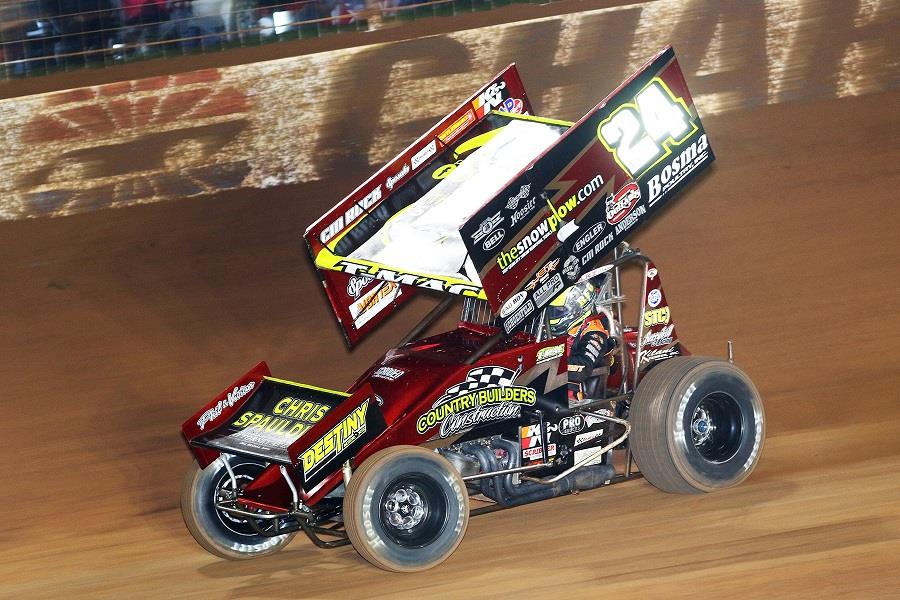 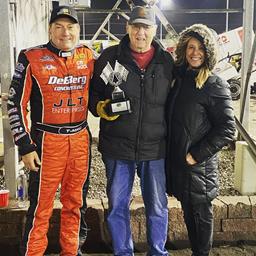 Tuesdays with TMAC – 21st State in the Books!

Tuesdays with TMAC – 21st State in the Books!

(Bill W) November 10, 2015 – Terry McCarl’s win in USCS action at Carolina Speedway in Gastonia, North Carolina on October 30 gave the Altoona, Iowa driver victories in 21 states. The two week trip to the Carolina’s culminated in the World of Outlaws World Finals brought an end to a successful 2015 campaign that saw ten wins.

The USCS events October 30 and 31 were an improvisation. “We had planned on going to the Short Track Nationals (in Little Rock) and they rained out,” says TMAC. “We just started heading towards North Carolina and Greg McCormick from the Buffalo Wild Wings team told me they were headed for the USCS races over there. It wasn’t far from Charlotte, so we got the 360 out, got some tires and went.”

The result was a win for TMAC, as he led all 30 laps at Carolina Speedway. “It was neat going to a different track and seeing fans that you haven’t seen in a long time or ever,” he says. “Of course, winning is always fun. That Jaymie Moyle 360 has been amazing for us. I can’t thank Don Long from Searsboro Telephone Company enough for letting us use that thing. We’ve had a great run this year with the 360 Nationals and the win at Trophy Cup.”

He would try to add a 22nd state on Halloween, when USCS visited Cherokee Speedway in Gastonia, South Carolina. He would end up second at the checkers. “We were pretty excited to go for the win there too,” says TMAC. “That may be my only shot to get one in South Carolina. We came up just a little short. We gave it a good run and kept it close. It was a good show for the fans, and we had a lot of fun.”

TMAC last raced with the series fourteen years ago. “Pete Walton does a great job,” he says. :His wife and daughter run the operation and they do a really good job. It’s a family operation. We hadn’t raced with USCS since 2001 and the boys, DJ Brink and I had a great time.”

The World Finals saw some success too. TMAC would qualify sixth and tenth quick for respective shows on Friday and Sunday (postponed from Saturday). “We qualified well for both nights,” he says. “We were excited about that. We missed the front row for the second show by six thousandths of a second.”

On Friday, he would qualify for the Dash with a heat win. “We had a great car both nights in the heats,” says TMAC. “The first night, we were able to win the heat, and the second, we went from fourth to third. We hooked a rut in the Dash, and we found out later we broke the left front shock internally.”

TMAC would come home eighth on Friday, and struggle a bit on Sunday. “Without the shock, it was a handful, but we still ended up eighth,” he says of Friday’s finish. “I couldn’t make two laps the same. The second night, we just weren’t very good. We may find another problem with the car from the night before when we unload it. We were lapped early and caught a caution. That kept us from gaining much ground.”

This Month in TMAC History!

TMAC teamed with Al Vanderwoude in his #2V to compete at the Devil’s Bowl Speedway in Mesquite, Texas. The year was 1989, and the United Sprint Association (USA) series was the sanctioning body. Things didn’t go the best over the weekend for the team in races that saw Sammy Swindell and Jack Hewitt take weekend feature events. The Vanderwoude car was put into the 1987 Knoxville Nationals finale by Danny Thoman.