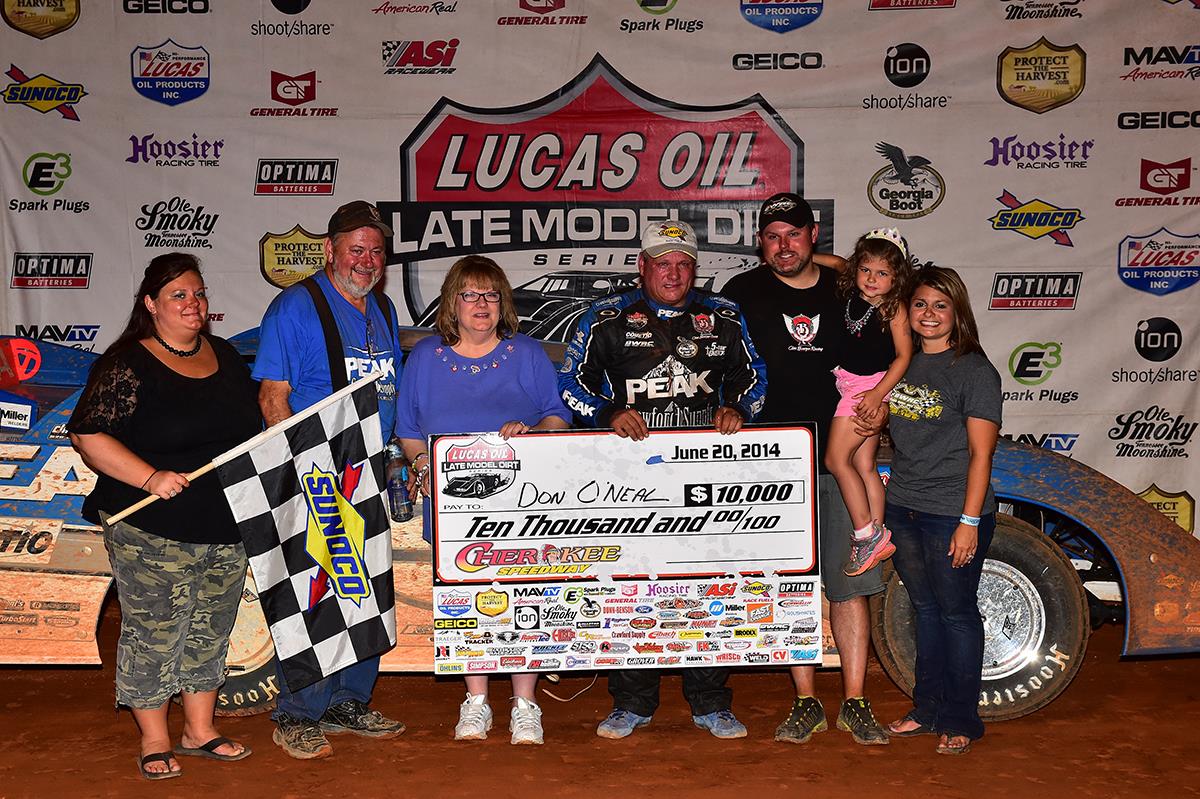 O’Neal led the first two laps until Overton powered by him to take the point. Overton then led until lap 36 when O’Neal maneuvered around the leader for good and went on to win his fourth LOLMDS event of 2014. Overton recorded his best career LOLMDS finish with his second place run. Jonathan Davenport finished third, followed by Casey Roberts, and Jimmy Owens.

“What a night! To win for Barry and Lance Wright is great! The race shop is just down the road, so I know its special for them to be in victory lane tonight. We had a terrific night,” said O’Neal, who swept the evenings events

“I kind of stumbled there in turn two on about the third lap and let those guys [Overton and Davenport] by me. But we fought back. I went by Davenport and then followed him [Overton] for what seemed like forever. Traffic kind of held him up a little. I knew I had a car capable of getting back around him. I was patient with him. He drove a very good race. Once we caught up to him we were able to work the car better off of turn four and that’s when we retook the lead.”

“I have to thank Clint Bowyer for giving me this opportunity. Thanks to all of my sponsors, Peak, Crawford Supply, Traeger Grills, Ohlins, Toyota, Georgia Boot, Clements Race Engines, and of course Barry Wright Race Cars. Good to have Casey Bowyer [Clint’s brother] here tonight to see us win. My crew chief Jeremy Justice was giving me hand signals, and telling me where to run, I just can’t thank him enough. He may be young, but he knows what he is doing. It takes a total team effort to win this championship, and we have all the pieces in place.”

Overton; piloting the Troy Baird owned, Baird Transport, Club 29 Race Cars entry; was pleased with his runner-up finish. “To run second with these guys, wow, I don’t know what to say. I thought for a moment, hey I am leading this race, I might just win it. When he [O’Neal] got back around me, I knew I was in trouble. That caution with eight laps to go gave us some hope, but once we went green he [O’Neal] was gone. I have to thank Ronnie Stuckey and Darrell Lanigan for their help on the car. We are very pleased with it. We look forward to running several more Lucas Oil races the rest of the season.”

Davenport came into the race as one of the local pre-race favorites and held steadily in third place at the finish. “We had a really good car tonight, those top two were just a little better than us. We will take it and head to Smoky Mountain tomorrow night, said the driver of the K&L Rumley, Longhorn Chassis #6.

For the latest breaking news on the Lucas Oil Late Model Dirt Series, log onto www.lucasdirt.com and follow the series on www.facebook.com/lucasdirt and www.twitter.com/lucasdirt.